Four Sisters Prepare for Next ‘Adventure’ of Leading SNJM Congregation 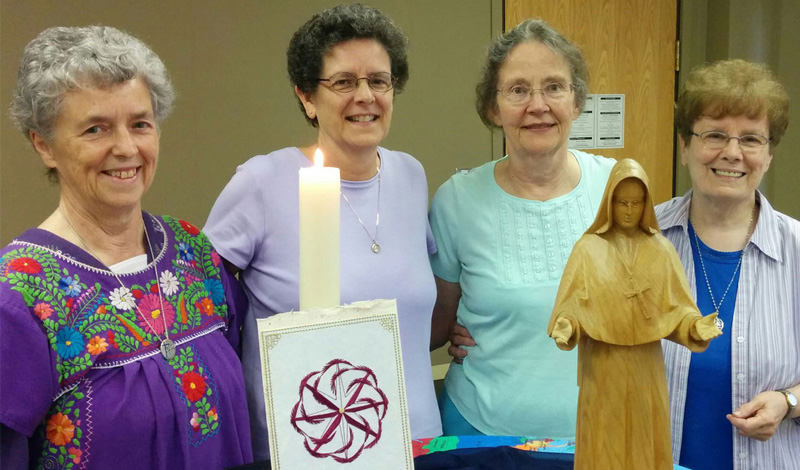 As 2016 draws to an end, four Sisters of the Holy Names of Jesus and Mary (SNJM) prepare to begin a leadership term that may bring some of the most significant changes in the history of the 173-year-old religious community. Last July, representatives from all SNJM provinces and sectors gathered in Cornwall, Ontario just outside Quebec Province for the community’s 34th General Chapter. The Chapter is a special convocation the Sisters hold every five years to prayerfully choose new leaders and make major decisions about their future direction and organizational structure. As part of that process, the new Congregational Leadership Team was named. Sister Linda Haydock of Seattle, WA will serve as Congregational Leader, in partnership with three councilors: Sister Lorna Cooney of Dorval, Quebec, Sister Mary Ellen Holohan of Portland, OR and Sister Kathleen Ross of Yakima, WA. They will take office on Jan. 1, 2017 and serve through the end of 2021. The General Chapter theme, “An Adventure with the Spirit,” seems likely to remain at the center of the Sisters’ ongoing challenge to themselves to listen for God’s voice and live out their mission in their own time. As Gospel women committed to the full development of the human person, they seek to continually renew their engagement with the needs of the world as well as to make wise choices about their own health care and living arrangements as they age. Sister Linda is a well-respected social justice advocate. As the founding executive director of the Seattle-based Intercommunity Peace and Justice Center, she has ministered on behalf of people on the margins of society. IPJC is a partnership of religious communities that challenges corporations to change unjust practices, advocates for sustainable water resources, seeks to end human trafficking, facilitates empowering action by low-income women through Women’s Justice Circles and fosters opportunities for young adults to gather for justice, spirituality and community building. Sister Linda has nurtured IPJC’s growth as a community-building force for systemic change for economic, racial and environmental justice. She is the recipient of the 2016 Archbishop Raymond G. Hunthausen Humanitarian Award. Sister Lorna has worked for many years to promote understanding of the SNJM charism, which is God’s unique gift to the Sisters of the Holy Names to share with the world. She is bilingual and bi-cultural as a native of French-speaking Montreal, Quebec. In addition to serving three prior terms in SNJM Congregational leadership, Sister Lorna heads the Charism Office and is the creator of “Pilgrimage of the Heart,” a retreat experience based on the life of Blessed Marie Rose Durocher and the sacred sites of the religious community she founded. Sister Mary Ellen is returning to Congregational leadership after ministering for 10 years on the U.S.-Ontario Province Leadership Team, including five years as Provincial leader. Previously, she served as a member of the Congregational Leadership Team and was chosen as its first presiding leader from the United States. Within the Province, her ministries have ranged from outreach to the elderly and sick in a low-income parish to resource and infrastructure management, always working to support the goals of the Congregation. As founding President of Heritage University, Sister Kathleen is nationally known as a leader in higher education, especially in the field of cross-cultural communication. As provost of Fort Wright College in Spokane, WA in the 1970s, she built partnerships with the people of the Yakima Nation and initiated new opportunities for rural, minority and low-income students to gain four-year college degrees. Her work has been recognized by numerous awards, including the 1989 Harold McGraw Prize in education, the 1991 John Carroll Award from Georgetown University and the 1995 State of Washington Medal of Merit. In 1997, she was selected as a MacArthur Foundation Fellow, also known as the “Genius Grant.”