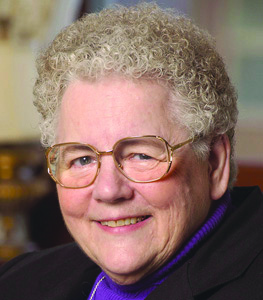 Sister Joan Berger, SNJM November 26, 1932 – February 26, 2022 Sister Joan Berger, SNJM, 89, died on February 26 at Mary’s Woods at Marylhurst, Lake Oswego. The Liturgy of Resurrection will begin at 10:30 am, March 11, at Our Lake of the Lake Parish, Lake Oswego. A reception follows. The burial will take place at 1:30 pm at Holy Names Cemetery, Marylhurst. The daughter of Henry and Catherine Gingrich Berger, Joan was born in Lincoln, Neb., but spent the majority of her childhood in Portland. She attended St. Stephen’s School and St. Mary’s Academy where she was student body president. In 1951 a year following her high school graduation, Joan entered the Sisters of the Holy Names of Jesus and Mary at Marylhurst eventually receiving the religious name Sister Marita Jeanne. Sister Joan found education her life’s mission, once saying that “I grew up in a family of educators and being a Holy Names Sister allowed me to live out my dream of being a teacher.” She started her ministry in education as an elementary teacher in Holy Names schools in Bend at St. Francis of Assisi, Salem at St. Joseph, Portland at Holy Redeemer and St. Philip Neri, and as principal in Medford at Sacred Heart. In 1973 she moved to the secondary level joining the faculty of St. Mary’s Academy as a teacher of religion and later dean of students. In 1983 Sister Joan chose to pursue a degree in social work at Portland State University. On completion of her MSW, she specialized in the areas of children’s services and the care of the elderly. After several years she returned to her true interest of education, branching out into library, media, and computer work first at Portland’s Archbishop Howard School and then enjoying many years at her alma mater St. Mary’s Academy. Most recently she was a member of the resident community of Mary’s Woods at Marylhurst. In 2007 Sister Joan was recognized as a Distinguished Alumna by St. Mary’s Academy for “her dedication to education, her experience, her wisdom, and her generosity of spirit.” In speaking  of education Sister Joan said, “The art of being a good listener is the art of being a good teacher.” Throughout her life Sister Joan exemplified attentive listening and will be remembered for her care and concern for those she encountered. A Holy Names Sister for 68 years, Sister Joan is survived by her siblings Barbara Nisbet and John Berger, her nieces and nephews, and members of her religious community. Remembrances may be made to the Sisters of the Holy Names, PO Box 398, Marylhurst, OR 97036 or online at www.snjmusontario.org/donate.