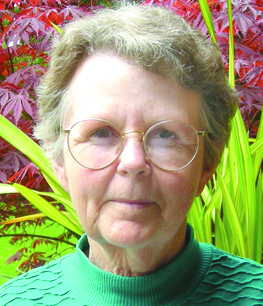 The daughter of Paul and Nell Dalton Bird, Carol was born in North Bend, Ore. When she was quite young the family moved to The Dalles, Ore., where she grew up. Following her graduation from St. Mary’s Academy in The Dalles, she entered the Sisters of the Holy Names of Jesus and Mary at Marylhurst, Ore., eventually receiving the religious name Sister Miriam Paula.

Sister Carol’s entire career involved music — in the classroom, in the Church, and through private lessons. She taught piano, organ, choir and general music in Holy Names schools in Portland, Eugene, and Lake Oswego in Oregon and in Pomeroy, Seattle and Spokane in Washington.

“I always wanted to teach music,” Sister Carol said. “I wrote that request in my application letter for entering the convent and gratefully they granted my wish.” Over time, she received her education as a music educator at Marylhurst College (BM) and the University of Oregon (MM). For three years, she departed temporarily from her music career and served as attendance secretary at Portland’s St. Mary’s Academy.

As well as the “music nun,” Sister Carol was the “hiking nun.” When she was not teaching, performing or singing, she was drawn to the outdoors. Her hiking adventures culminated in a 400-mile hike with other Holy Names Sisters covering the entire Oregon section of the Pacific Crest Trail. On another occasion she was a guest on a one-month trip to India, including a pilgrimage to New Delhi, hikes to monasteries in the hills, and a week in Bombay.

Reflecting on her years in the SNJM Community, Sister Carol said, “I have had a wonderful life. Although it was not always easy, my religious experience has been absolutely amazing. And I have had the honor of living and working with wonderful women.”

A Holy Names Sister for 68 years, Sister Carol is survived by her sisters, Claire Penners (The Dalles) and Margaret Chastek (Spokane), her nieces and nephews, and members of her religious community. Remembrances may be made to the Sisters of the Holy Names, PO Box 398, Marylhurst, OR 97036 or online at www.snjmusontario.org/donate.