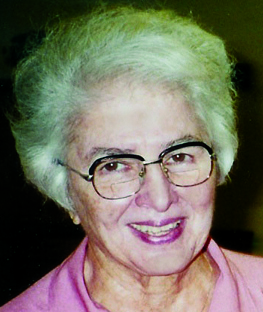 Funeral services rae pending in this time of the COVID-19 pandemic. Sister of the Holy Names Miriam Carmel Pontieri, died on October 1, 2020, at South Hill Village, Spokane, Washington.  Christened Eleanor Mary, she was born to Luigi L. Pontieri and Lucia Gallicano on June 3, 1922, in Spokane.  Eleanor’s family lived in St. Aloysius Parish, and it was in the parish church where she received the Sacraments of Initiation. She attended Logan Elementary and graduated from North Central High School.   Eleanor began her advanced academic life as a day student at Holy Names College, which was located in St. Aloysius Parish.   Eleanor entered the novitiate of the Sisters of the Holy Names at Marylhurst, Oregon on July 25, 1943, received her holy habit and religious name on February 5, 1944, and pronounced her vows August 5, 1945.

Sister Miriam’s life-long and special relationship as teacher, mentor, and spiritual director began with high school students at St. Mary’s Academy in Medford, OR.  Over the next twenty-five years, she taught at Sisters of the Holy Names’ academies and colleges in California, Oregon, and Washington.  In the early 1970’s, Sister Miriam began her ministry as a director of retreats and spiritual director, a ministry she actively continued until recently. Her natural gifts as teacher and mentor grew with the ministerial opportunities she was given as moderator for the Sodalities at the academies and colleges where she taught, and the impact of Vatican II’s encouragement of the study of Sacred Scripture.  Sister Miriam began her tenure at Immaculate Heart Retreat House as Director of Retreats.  Over the next years, she collaborated with Rev. Armand Nigro, SJ in directing retreats, especially for women religious; their work taking them as far as Australia.  She next served on staff of the Mater Dei Institute for women religious housed at Marian Hall on Boone Street.

Sister Miriam is predeceased by her parents, Luigi and Lucia Pontieri and her brothers, Lucian Pontieri and Louis Pontieri, and sisters Florence Pontieri and Carmel Pontieri Johnstone. She is survived by her grand-niece Laurel Henderson, other nieces and nephews and their extended families, the spiritual directees with whom she continued to journey, and her religious community, the Sisters of the Holy Names of Jesus and Mary and Affiliates.  Funeral services are pending in this time of COVID-19 pandemic.

Memorial gifts may be made to the Sisters of the Holy Names Retirement Fund, PO Box 398, Marylhurst OR 97036.