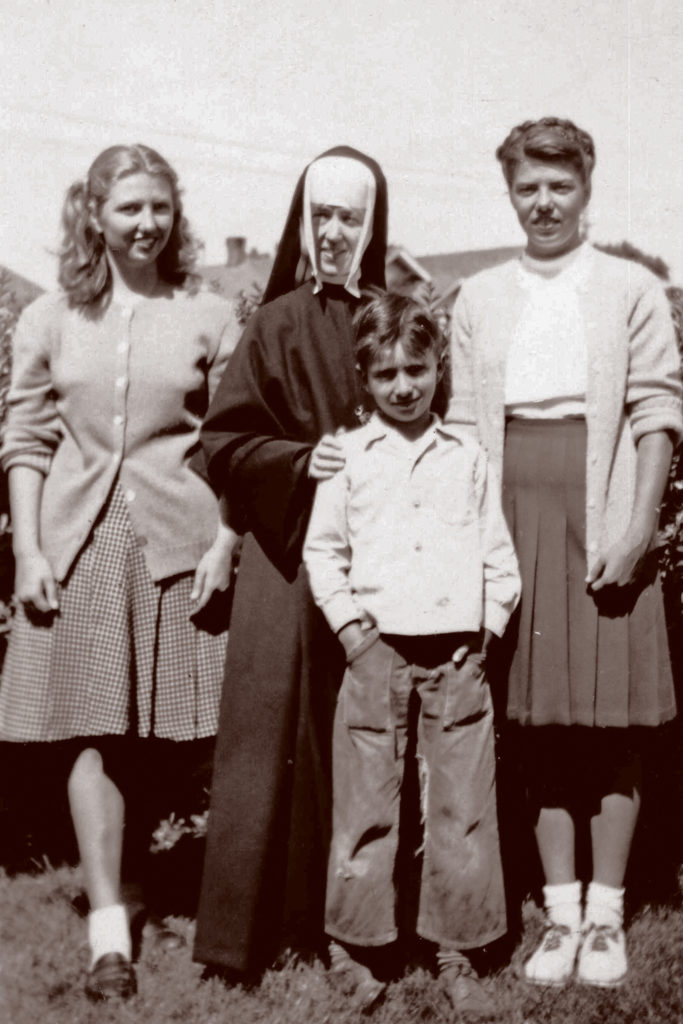 Joanne Goheen (left), her brother Ed (front) and sister Pat (right) visited their aunt Sister Veronica Mary at the convent in Oregon in 1946.

Born in California, Joanne Veronica Goheen did not meet her father’s Oregon-based sister (and her own namesake), Sister Veronica Mary Goheen, until she was 10 years old. Still, her aunt made a lasting impression.

“I was in awe of her,” relates Joanne. “She was quite petite but had a power and authority about her that immediately caught your attention.”

Sister Veronica Mary served as principal of eight schools in Washington and Oregon between 1929 and 1957. She often taught a 7th or 8th grade class along with her duties as principal. After nearly 30 years in that role, she answered another call, serving 14 years as Treasurer for Marylhurst College and the Oregon Province. Not one to sit still for long, Sister volunteered until she was 91 years old. Joanne recalls, “There never seemed to be enough time to visit with her as she had to be about her current calling.”

Joanne followed Sister Veronica Mary’s example and taught primary school for more than 30 years. “At that point in my life, my father had passed, and I saw the need to help my brother and mother in the family refrigeration business, and like Sister Veronica Mary, I began a new career.” When her mother began to fail, Joanne cared for her until her mother’s death at the age of 100. “I didn’t consider it a sacrifice; it’s just something you do. You care for family.”

Joanne has been a donor to the Sisters of the Holy Names for many years, a tribute to her aunt and the work of her community. During visits to Sister Veronica Mary in Oregon she noticed the same loving, family care given to the Sisters by their community, the family of Sisters. “I wanted to help with this care, knowing that the need was far greater than the resources the Sisters have. I made the decision to include them in my will so that while I am living I have access to my assets, but upon my passing, a portion of those assets will carry on the Sisters’ work into the future.”

Joanne has truly followed in her aunt’s footsteps, both in a career of education and in a commitment to caring for others. If you would like to include the Sisters of the Holy Names in your estate plans, please email development@snjmuson.org or call Sarah Harris – (503) 675-7111.