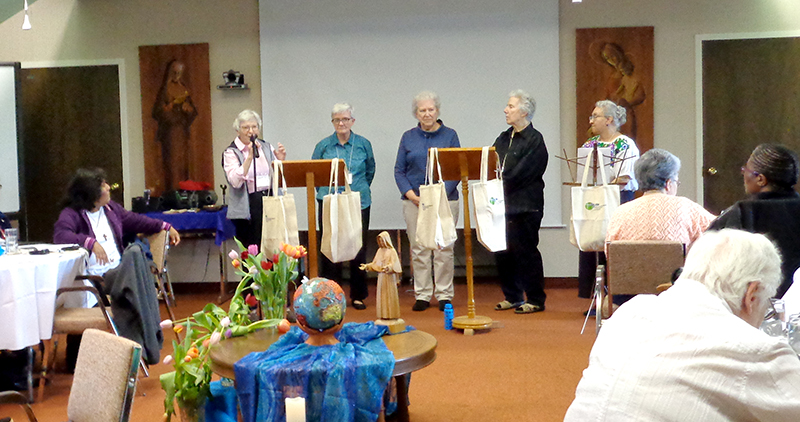 U.S.-Ontario Province Leadership Team members give a presentation as SNJM leaders from around the world gather in Longueuil, QC, where they affirmed the new Corporate Stand on Migrants and Refugees in April 2017. L-R: Sisters Maureen Delaney, Margaret Kennedy, Mary Rita Rohde, Mary Breiling and Guadalupe Guajardo.

In keeping with their commitment to “welcome the stranger among us,” the Sisters of the Holy Names of Jesus and Mary (SNJM) have overwhelmingly adopted a corporate stand expressing solidarity with migrants and refugees.

Affirming the corporate stand involved in-depth study, dialog, prayer and finally a vote by the entire SNJM community in countries where they minister, including the United States, Canada, Peru, Brazil and Lesotho.

The corporate stand represents a commitment to unite with others in response to the ongoing world crisis of human migration and strong anti-immigrant bias. About 65 million people who have been forcibly displaced face suffering not only from violence, poverty and illness but from government policies that feed widespread fear and persecution of immigrants.

“Members of the SNJM community have long supported immigrants through public actions such as vigils, marches and letter-writing campaigns, as well as countless quiet acts of solidarity and hospitality toward refugee families and individuals. Our corporate stand will give new impetus to these actions,” said Maureen Delaney, SNJM, Provincial of the U.S.-Ontario Province.

The Sisters of the Holy Names and their Associates based their decision on Gospel values, Catholic social teachings and their community’s unique mission – the full development of the human person through education, social justice, contemplation and the arts.