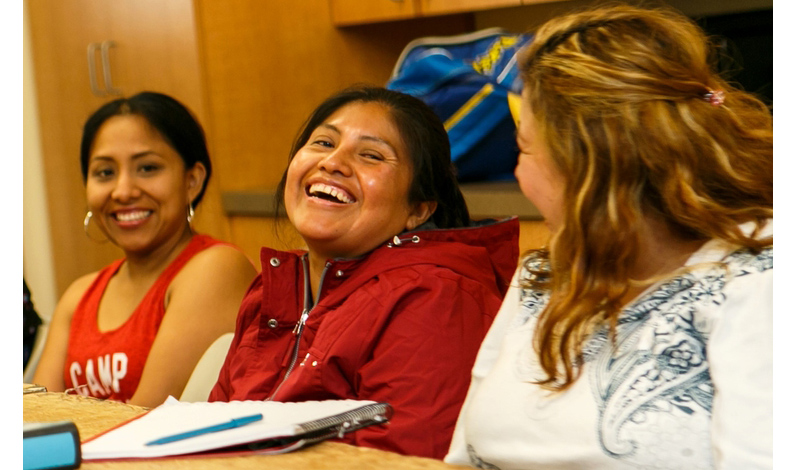 Students in an adult education class at Adelante Mujeres, an SNJM-supported organization in rural Oregon that empowers Latina women and their families with education, skills workshops and microenterprise programs. Photo courtesy of www.adelantemujeres.org.

The five leaders of the U.S.-Ontario Province of the Sisters of the Holy Names of Jesus and Mary have mailed a letter to all Catholic members of the U.S. Senate and House of Representatives asking them to help rescind recent executive orders affecting immigrants to the United States. Below is the text of the letter.

As the Provincial Leadership Team of the U.S.-Ontario Province of the Sisters of the Holy Names of Jesus and Mary, an international congregation of more than 1,000 Catholic Sisters and Associates, we reject the executive orders of President Donald Trump on immigration.

The January 25, 2017 executive order 13768 entitled “Enhancing Public Safety in the Interior of the United States” is antithetical to the U.S. tradition of welcoming immigrants, the Christian Scriptures, and Catholic Social teaching. Our faith calls us to welcome the stranger and to love our neighbor. Two sections of the order are particularly egregious to us:

Section 5: Enforcement priorities expands broadly those who are considered a deportation priority with no regard to their length of time in the United States, family situation, or contribution to the U.S. economy. For many immigrants from south of our border their only disobeying of U.S. law is entering our country without documentation.

Sections 7 and 8: Additional Enforcement and Removal Officers and Federal-State Agreements call for the hiring of 10,000 additional Immigration and Customs Enforcement (ICE) agents. The power of these agents is expanded to allow them to determine the level of threat of the persons they detain. Individual agents have little accountability to higher levels of authority for their judgments. Also, contrary to long-standing practice, state and local law enforcement personnel are now ordered to perform the functions of ICE agents.

We agree with Bishop Joseph S. Vasquez, chairman of the US Conference of Catholic Bishops, about the harms of this executive order:

“… (It) eliminates important protections for vulnerable populations, including unaccompanied children and asylum seekers…. (It) constitutes the establishment of a large-scale enforcement system that targets virtually all undocumented migrants as ‘priorities’ for deportation…

We call on the U.S. Congress to do all you can to protect the vulnerable in our world, including refugees, immigrants and children. We denounce the actions called for in Presidential Executive Order 13768 and we respectfully ask you to work to rescind this executive order. We look forward to your response.