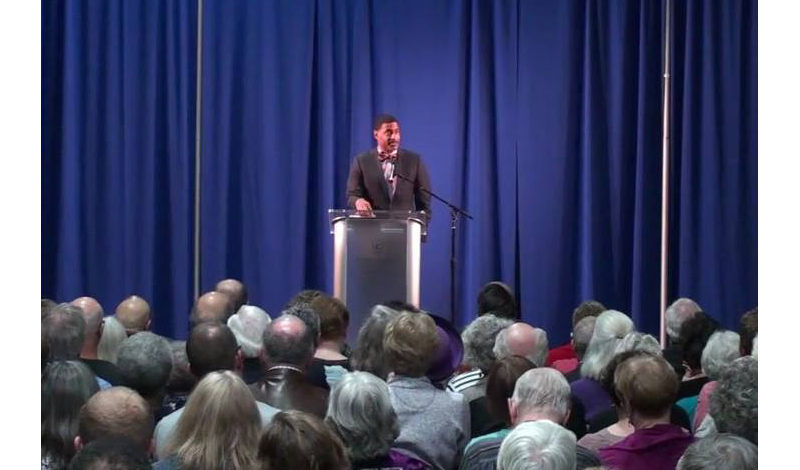 Rev. Dr. Otis Moss III speaks at the Collins Lecture at Concordia University in Portland, OR in November 2016. Photo courtesy of Ecumenical Ministries of Oregon.

Ecumenical Ministries of Oregon (EMO) announced today it will honor the Sisters of the Holy Names of Jesus and Mary (SNJM) as “Ecumenist of the Year” on May 11 at its Benefit Dinner and Awards Celebration.

EMO’s annual awards seek to “honor extraordinary individuals and organizations such as SNJM whose courage, moral vision and commitment to action have contributed profoundly to making Oregon, and the world, a better place,” the organization said in a news release. The Sisters have been ministering in the Northwest since Oregon became a state in 1859.

EMO cited SNJM’s commitments to education and justice, demonstrated by its recent partnership with EMO and the Albina Ministerial Alliance to bring the Rev. Dr. Otis Moss III to Portland in 2016. Rev. Dr. Moss delivered the annual Collins Lecture on “Redeeming the Soul of America: Race, Justice and Reconciliation.”

As a statewide association of Christian denominations, congregations, ecumenical organizations and interfaith partners, EMO brings people of faith together to improve the lives of Oregonians through community ministry programs, ecumenical and interreligious dialogue, environmental ministry and public policy advocacy.

The awards celebration will be held at the Portland Hilton Hotel, 921 SW Sixth Ave., following a reception and auction to benefit EMO’s ministries to the poor, the vulnerable, the hungry and the sick throughout the state. For more information, contact Carla Starrett-Bigg at (503) 221-1054, ext. 275, or csbigg@emoregon.org.