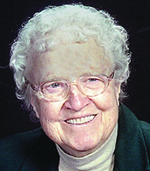 Sister Patricia Baxter (Sister Mary Emmetria), 90, died at the Marie-Rose Center at Mary’s Woods at Marylhurst in Lake Oswego March 24, 2017. She was a member of the Sisters of the Holy Names for 69 years. Her Mass of Resurrection will be held at 11 a.m. April 22, 2017, in the Chapel of the Holy Names, Lake Oswego, Oregon.

The daughter of Emmett and Mary Rickabaugh Baxter, Patricia from the age of 4 had a talent for music widely recognized by her family and teachers. It was the family legend that while Dolores (later Sister M. Veronica Ann) and Emmet did the dishes, Pat practiced her music. She played for school, for the parish, and for her family, but she also exhibited signs of leadership culminating in the office of student body president at St. Mary’s Academy.

During her school years she held the jobs common to high school students: babysitting, clerking, working in the cannery, but she was proudest of the time she spent as a “Rosie the Riveter” in the shipyards during World War II. At home, devotion to the rosary and daily Mass and at school after the example of the sisters who taught her, encouraged her decision to join the convent.

After a year on a music scholarship at Marylhurst College, she entered the novitiate of the Holy Names at Marylhurst in July 1945 and received the name Sister Mary Emmetria. Following profession she started a long and fruitful ministry as a music teacher. Except for six years at Christ the King School in Richland, Washington, her ministry centered around Portland and Marylhurst. She taught at St. Thomas More and Holy Redeemer Schools, at St. Mary’s Academy and for many years at Marylhurst College.

Because Sister Pat appeared so open and happy, it was easy to forget that she was a woman of deep faith in God and in the Blessed Mother, facts which governed her life. In her own family she used this faith to heal a long-time hurt. Her parents had been legally separated since she was a child because of her father’s worsening fight with alcoholism. Because he was estranged from the family, Pat determined to find him, located him in a Skid Row section of Los Angeles, took him in, got him to rehab. The parents reconciled, he got a fine job. And the Baxters became a family unit once again.

This same faith coupled with the education she had gained with two master’s degrees: one in music and the other in liturgy, Pat founded the Liturgical Arts Resource Center (LARC) at Marylhurst. This brought together artists, musicians, writers, even clowns to share their art forms. Sister Pat’s advanced macular degeneration brought an end to this after ten years, but she continued teaching the little ones, and at the same time became more than ever involved in a commitment to social justice. She joined organizing groups; wrote letters and emails, made phone calls. She marched, she picketed, and she prayed.
She also continued to dream dreams. At the time of the 50th anniversary of the founding of Marylhurst College, she had a vision of a large barge floating down the Willamette River and the Marylhurst Symphony playing on it as crowds lined the riverbank to cheer them on. People smiled. But on October 28, 1979, a large barge with the symphony orchestra on it came down the river, and crowds cheered.

As Sister Pat’s memory began to fail, she received wonderful care from her dear friends, Sister Anne Toback and Sister Mary Noreen O’Leary, and when she moved to Mary’s Woods she remained the same beautiful, positive, loving faith-filled woman who was loved by all.

Sister Patricia is survived by her nieces and nephews and the members of her religious community. Remembrances may be made to the Sisters of the Holy Names Retirement Fund at snjmusontario.org/donate.