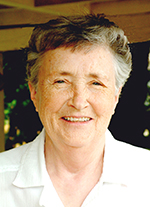 Patricia Josephine Daly was born March 15, 1927, and died March 18, 2017. The celebration of Sister Pat’s 90th birthday took place at her bedside at Hospice of Spokane House where Sister Pat died. The fifth child of John F. Daly and Isabelle Nist Daly, Sister Pat was born and raised in Seattle. Her formative school years included elementary education at St. Anne’s School and high school at Holy Names Academy. On July 25, 1945, Pat began her life as a Sister of the Holy Names when she entered the novitiate at Marylhurst, OR. She professed her vows on August 5, 1947. Sister Pat received her Bachelor of Science in Education through Holy Names College, Spokane, WA, and Marylhurst College, Marylhurst, OR. In 1965 she completed a Masters of Science in Education from Seattle University.

Sister Pat is remembered as a calm and competent elementary teacher. For 25 years, her assignments were in the parish schools where the Sisters served in Washington and Oregon. She moved between Spokane, Seattle, Medford, Tacoma, Everett, Lake Oswego, Eugene, and back to Spokane where she taught at St. Francis of Assisi, Sacred Heart, Cataldo Middle School and All Saints. A change in ministry began for Sister Pat in 1974 when she moved to Kirkland to serve in parish ministry at Holy Family Parish. This new direction was to remain her ministerial focus for the next twenty years taking her as far away as Whittier, CA, and bringing her back to Seattle to serve in Holy Rosary and St. Paul parishes. In 1997, she accepted the call to serve on the Washington Province Leadership Team. When her term was complete, she transitioned to Marie-Rose House in Wapato, WA, assisting as house director and coordinator of ministries until she once again found her way to Seattle in November 2005.

Her final years of ministry reflected Sister Pat’s deep commitment to prayer, her SNJM community and its commitments to justice and care for creation, and to issues of social justice. She volunteered at Jubilee House, Intercommunity Peace & Justice Center, and on committees at St. Joseph parish. She joined with other politically active persons to overturn the Supreme Court decision on “Citizens United”. She was committed to the SNJM Associates and served as sponsor to several; she journeyed with women discerning a religious vocation; she enjoyed both of her monthly book groups. Sister Pat is described as a “natural contemplative” who brought a serene, yet “upbeat” spirit to everyday life; a woman who never stopped learning and growing, showing us all how to arrive at true wisdom.

Memorial gifts may be made to the Sisters of the Holy Names Retirement Fund, 2911 West Fort Wright Drive, Spokane, WA 99224.