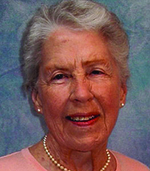 Katherine Blanche Gray was born to Lucian A. Gray and Mary Katherine Morrissey Gray on July 16, 1922 in Nespelem, WA and passed peacefully from this life on January 29, 2017 at Hospice House South, in Spokane, WA. As one of nine children, Sister Katherine was raised and completed her elementary and high school education in Nespelem, WA. She attended Holy Names College in Spokane, entered the novitiate of the Sisters of the Holy Names in July 1944 at Marylhurst, OR and professed her vows in August 1946. Sister Katherine received her BA in Education from Holy Names College in Spokane and her Masters of Education from the University of Oregon with an emphasis in Administration, including an Administrative Internship at Marygrove College in Detroit, MI.Sister Katherine’s gentle manner, extraordinary mind and gifts as teacher, administrator and mentor continued to form and shape her remarkable and noteworthy ministerial career throughout the United Stated for many years. She served as a teacher and principal in several parish elementary schools staffed by the Holy Names Sisters in St. Paul, Salem, Portland and Astoria, OR and Spokane, WA. She continued to influence the lives of her students as she moved to the high school level teaching at St. Francis in Eugene, OR and North Catholic High in Portland, OR. In 1965, Sister Katherine began her years of service at Ft. Wright College in Spokane as their Academic Dean. In 1973, her calling to parish ministry began at Star of the Sea Parish in Honolulu, HI followed by an appointment in 1975 to serve as a Regional Pastoral Planning Coordinator in Council Bluffs, IA. Sister Katherine returned to Spokane in 1977 to again serve Fort Wright College as President, until the time of its closure.In 1980 Sister Katherine accepted a position at St. Martin’s University in Lacey, WA first as an assistant VP and then as Vice-President for Academic Affairs. In 1985, she accepted the position of Executive Director for the United States Catholic Conference of Bishops Commission on Certification and Accreditation, which required her to move to St. Louis, MO until 1990 when she returned to the Pacific Northwest. In 1993, she retired from active ministry to settle in Olympia, WA where she devoted her time to a large extended family, and serving others in a variety of volunteer works. Of note, were the more than 20 years she and her sister Dorothy served the poor with the St. Vincent de Paul outreach program at St. Michael Catholic Church.Sister Katherine is survived by her SNJM Religious Sisters, one sister, Dorothy Hillier of Olympia, WA and a very large, loving and devoted family of nephews and nieces. Sister Katherine was preceded in death by her mother and father Mary and Lucian Gray and siblings, Paul Gray, Joseph Gray, Mary Elizabeth Gray, Margaret Waggoner, infant Katherine, Hazel Gates and Lucian Gray Jr.

Memorial gifts may be made to the Sisters of the Holy Names Retirement Fund, 2911 West Fort Wright Drive, Spokane, WA 99224.