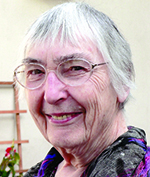 Sister Mary Angela (Mary Ann Morbeck), age 94, died at Mary’s Woods in Lake Oswego on January 27, 2017. She was a vowed member of the Sisters of the Holy Names for 74 years.

Mary Ann Morbeck was born in the Palouse country of Washington state where she attended tiny St. Boniface High School in Uniontown. She grew to know the Holy Names Sisters there. She entered the novitiate in 1940, and received the name Sister Mary Angela.

After her religious profession in 1942 Sister taught middle school grades in St. Paul, St. Helens and in Portland at Cathedral and St. Peter’s schools.

She was a good teacher and appreciated by her students, but she would spend the next 19 years at the Provincial House at Marylhurst where she performed a variety of duties including assisting in the infirmary, cooking, taking charge of the gardens, overseeing maintenance and many other acts of kindness.

As a driver, Sister Angela went from business to business collecting stamps for the Holy Names Community Stamp Bureau, and medicines and supplies for Lesotho, which she packed and sent off to Africa. Her contributions in this effort resulted in literally thousands of dollars of help in cash and supplies.

When she returned to her beloved North Portland, she worked at Assumption and Holy Cross Schools, replacing in the classroom and helping in the office. It was during this time that she became involved with the Asian boat people. She worked with Catholic Charities to aid Vietnamese, Cambodian, Laotians, and Hmong refugees in untold ways.

She brought the same kind of care to the people of Assumption Village, a retirement community where she resided for several years. With her little car she brought people to appointments, to shop, to visit family. She prayed with them, helped to fill out forms, made friends with them. Hard-working, meticulous, loving, Sister Mary Angela was a woman of prayer, of devotion to Mary through the rosary and had a special mission to pray for priests and seminarians.