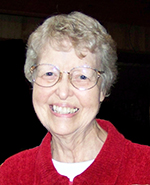 Sister Joann was born Joan Elizabeth Groo on June 27, 1924, in Montpelier, Idaho. The middle child of Russell P. Groo and Catherine Brennan Groo, Sister Joann’s early childhood was spent in Montpelier. In 1929, the family moved to Spokane. Her mother’s strong Catholic faith influenced the choice of move, because she wanted a strong religious upbringing for her family.  Settled in Spokane, Sister Joann attended St. Aloysius School, Holy Names Academy and Holy Names College from which she graduated in 1960 with her B.A. Prior to entering the novitiate of the Sisters of the Holy Names in July, 1945, Sister Joann had completed her schooling to become a registered nurse at Sacred Heart School of Nursing, Spokane. She professed her religious vows on August 5, 1947.

Sister Joann’s years of ministry began as a nurse in the infirmaries of Sisters of the Holy Names at Marylhurst, OR and in Seattle, WA. A change of direction came for her, when in 1956 she was assigned to the high school classroom as science and science lab teacher. Over a period of years, she taught at the School of the Immaculate and at Holy Names Academy, both located in Seattle. This was a ministry she enjoyed and a period of her life from which she retains long standing friendships. She returned to Spokane in the early 1970’s to serve as registrar and counselor at Holy Names Academy and Fort Wright College. In 1981 her ministry again changed direction as she began work at Sacred Heart Medical Center as a Pastoral Minister. After a year of spiritual renewal in 1989, Sister Joann began tutoring and community service in the Spokane area. She tutored at the Barton School, provided financial accounting assistance for the local convent in which she lived, and served as a volunteer at Our Place Community Ministries. Though nurse and scientist by vocation, Sister Joann enjoyed reciting from memory the poetry of Gerard Manley Hopkins, and often had at hand a good story with which she’d regale her religious Sisters during their weekly pinochle game. Sister Joann’s ready smile, quick wit, and always cheerful and welcoming disposition endeared her to all she encountered in her various roles in the institutions in which she lived and served in Seattle and Spokane.Sister Joann died January 25, 2017, at Brookdale South Regal, Spokane, WA. She is survived by her Religious Sisters.  She is predeceased by her parents and her four siblings: John Groo, Mary Kestell, Katherine Dugoni, and Patricia Kruger. A devoted aunt, she is survived by numerous nieces and nephews and their extended families living in the Spokane area and in California.