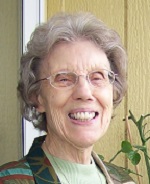 The only daughter of Michael and Maria Herres, Mary Ann was born in Pomeroy, WA on March 15, 1927. She joined six brothers and three more brothers followed her, growing up on a large wheat farm. Mary Ann graduated from Holy Rosary Elementary School in Pomeroy, and furthered her education at Pomeroy High School and St. Patrick’s in Walla Walla. She earned her B.S. from Holy Names College, majoring in Science and her M.A. from Webster College in St. Louis in elementary education.Mary Ann worked as a medical technologist at Virginia Mason Hospital after an internship at King County. She then worked for three years as a lab tech in a doctor’s office while helping her brother to care for his children after the death of their mother. She refers to this time as full of blessings and challenges.Sister Mary Ann entered the novitiate of the Sisters of the Holy Names in 1952, professing her vows in 1954. Sister spent her early years as an elementary teacher in parish schools in Oregon and Washington, she served as Principal in schools in Spokane and Seattle, before beginning parish ministry at St. James Cathedral, Seattle. She served as Community Director as a Member of the Washington Provincial Administration from 1982-1986. Desiring to focus her ministerial work with the Hispanics in the Yakima Valley sister began work as Director of Religious Education at St. Peter Claver Parish in Wapato. While continuing to serve the parish in various capacities she began to cultivate a dream of opening a center for women and children. In 1994 working with others Marie Rose House was opened in Wapato. In 2002, Sister moved to Toppenish and continued her work in support of the needs of her neighbors until her retirement in 2005. She moved to Spokane and joined others at SNJM Sabbath Space located at St. Francis of Assisi Convent, Spokane. She moved to the Convent of the Holy Names in March of 2009. Maintaining her health was becoming more time and energy consuming, so the added support enabled her to continue to be of service to her Sisters and guests, and to her very large and devoted family.Although the move from the Convent to Brookdale challenged what she had expected for her later years, she decided to be happy in a new situation, creating home with her Sisters and with the other residents in her expanded community. This has been a great gift for all. Mary Ann’s leadership skills were best used in sharing her spirituality, community building, and fun times! Her faith in a loving God pervaded her life and all her relationships. Mary Ann’s farming roots were evidenced in her desire to plant gardens for food and for beauty wherever she lived. Her most recent efforts brought joy outside every window!Sister Mary Ann Herres died December 18, 2016, at Brookdale South Regal in Spokane, WA. Mary Ann is survived by her religious Sisters, her brother Richard and many beloved and loving nieces and nephews. Her brothers Michael, Leonard, John, Herman, Ferdinand, Hubert, Joseph and Herbert have died. Memorial gifts may be made to the Sisters of the Holy Names Retirement Fund, 2911 West Fort Wright Drive, Spokane, WA 99224.