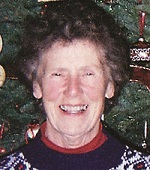 After a short aggressive illness, Sister Eileen Brown (Sister Marian Paula) died at her home in Gladstone, Oregon, on September 4, 2016. She was a vowed member of the Sisters of the Holy Names for 65 years.

Eileen Patricia Brown was born June 11, 1931, to Jack W. Brown and Anne Farley Brown, the oldest of nine siblings. After graduating from St. Mary’s Academy in Portland, Eileen entered the novitiate at Marylhurst in 1949 and received the name Sister Marian Paula. She made her first profession of vows in 1951, and began a long life of service, both as a teacher and administrator.

A secondary teacher of history, social sciences and religion, Sister Eileen taught at Holy Names Academy in Spokane, St. Mary’s Academy in Portland, and Sacred Heart Academy in Salem. At Sacred Heart she also served as vice-principal before her nine years as principal. Simultaneously she served as province supervisor of secondary schools in Oregon.

In 1974 she went to Marylhurst College as part of the Futuring Committee. She took on the position of vice-president and director of programs in the confusing time of the uncharted days of new directions after the cessation of the women’s college program. Along the way she earned her second master’s, a degree in Future Studies, from the University of Houston in Texas.

And then came 10 years in Alaska. She started as Superintendent of Catholic Schools in the Diocese of Fairbanks, and then moved on to serve as Chancellor of the diocese. While there, she started a group for religious women in the region, and came to love the land, the people, and the joy of salmon fishing!

A call from the Oregon Province in 1992 brought her back to Oregon where she took on the responsibilities as Provincial Director. During this time, besides serving the Sisters of the Oregon Province, she also was instrumental in the formation and growth of Mary’s Woods at Marylhurst, the continuing care retirement community built about the Sisters’ Provincial House.

With a continuing interest in Marylhurst University, she joined the Board of Trustees in 1992 serving until shortly before her death. For several years she also taught the Senior Seminar required of all undergraduate students before their graduation, the culminating experience of their studies at Marylhurst.

In later years, Sister Eileen served on the board of Mary’s Woods, spent several years as a CASA volunteer and volunteered on numerous committees, always with ideas and enthusiasm. Known for her energy and vigor, she travelled to Vietnam at age 84 for a summer program to teach teachers there how to teach.

Sister Eileen is survived by her sister, Sister Sally Brown; brothers, Father Bruce Brown, Eugene Brown, Richard Brown; nieces and nephews; dear friend and caregiver, Mary Jo Radosevich; and the members of her religious community. She is buried at Holy Names Cemetery, Marylhurst, Oregon. Remembrances may be made to the Sisters of the Holy Names, P.O. Box 398, Marylhurst, OR 97036 or online at www.snjmusontario.org/donate.