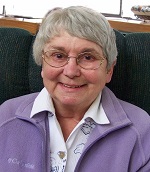 The only child of Marie (Millette) and Delbert Shaw, Delores was born in Yakima, WA, December 27, 1933. The family moved to Seattle in 1941 where her father was seeking employment. Here she met the Sisters of the Holy Names. Her mother died when Delores was 14 years old and her father decided to send Delores to Holy Names Academy. After graduation she worked as a nurse’s aide at Providence Hospital and attended Seattle University. These were powerful influences and increased a latent desire in her to be a teacher and perhaps a Sister teacher. On July 25, 1953, she took the train to Portland, OR, and a bus to the SNJM Novitiate at Marylhurst, OR, where she and 43 others began their lives as Sisters of the Holy Names of Jesus and Mary. Delores made her final vows on August 5, 1960. She earned a B.Ed. at Marylhurst College in 1959 and Masters in Ministry from Seattle U in 1982.

Although Delores was challenged with numerous health problems from birth, it did not deter her dream of being a teacher. She has been busy influencing countless young students over her 50 years as an educator. As a beginning teacher in 1956, Sister Delores had many wonderful mentors to whom she was very grateful. As a primary and middle grade teacher, she honed her teaching skills to a fine art, using her creative artistic abilities to beautify and enhance places where she ministered. She believed, “atmosphere is ennobling and uplifting to the persons who live and work in such surroundings.” Sister Delores brought much delight and happiness to many schools, classrooms and convents. Primary grades were her forte. She ministered in schools in Oregon at The Dalles, St. Paul and Portland; in Washington at Everett, Uniontown, Spokane, Seattle, and Tacoma. Her last official teaching position was 1997 at St. Edwards School in Seattle. She had a very special touch and was generous in sharing with others. Joy was reflected everywhere she went.

In 2011, ready to retire from the classroom, Delores joined her Sisters at the Convent of the Holy Names, Spokane; then moved two years ago with the CHN Community to Brookdale South Regal. Despite the discomfort of health challenges, Delores remained a very positive, peaceful, joyful person.

Sister Delores died peacefully at Hospice House of Spokane on July 12, 2016. She is survived by her Sisters of the Holy Names’ family and numerous friends, who are grateful for the caregivers at Clare Bridge, Hospice of Spokane and for the special daily care provided by their own SNJM caregivers.

Memorial gifts may be made to the Sisters of the Holy Names Retirement Fund, 2911 W Fort Wright Dr, Spokane, WA 99224.