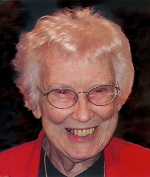 Patrick and Mary Genevieve Casey McCluskey were blessed with six children, the fifth being Anne, fondly known as Nancy, who joined the family January 15, 1923.  All the children were born in Seattle, Washington.  Anne finished Sacred Heart Elementary School and Immaculate High School before entering the Sisters of the Holy Names of Jesus and Mary at Marylhurst, Oregon.  She then earned a B.M. in education from Marylhurst College and a M.M in Piano Pedagogy from Eastern State College as well as National Accreditation in Piano.  Because her parents focused on the values of Catholic faith, education and music, the trajectory of Anne’s life and ministry was not surprising!

As Sister Mary Ricarda, Anne taught music from 1942 in Parochial schools in Spokane, Portland, Bend, St. Paul, Astoria, Salem, and Seattle before settling in Spokane in 1965 for the next eighteen.  The duties of a music teacher included, in addition to private lessons, church choirs, recitals, programs and parish liturgical support.  By 1970, Anne was drawn to group teaching of piano, far more strenuous than private lessons but, she found, much more effective.  She had studied group piano teaching at Columbia University Teacher’s College in New York, and was such a successful promoter of the PACE method that she was invited to present teachers’ classes and to conduct Musicianship Festivals all over the West Coast.

By 1984, a broken wrist and the rheumatoid arthritis that had plagued her for years took their toll, and she retired from teaching, only to volunteer in internal ministry with her religious community as a provincial secretary and archives assistant.  She also volunteered for Daybreak of Spokane.

Anne shared many gifts throughout her life, but her modeling of aging in wisdom and grace, living as fully as possible until she died—these may be the gifts most remembered and recalled!  Although profoundly deaf and nearly blind, Anne learned to compensate by sitting close to a speaker, by reading on her Nook, by asking questions, expressing interest in the people and events of the world within which she lived—the whole planet!  Her ability to use words, play with words, unpuzzle words were inspirational and fun.  Most of all, Anne’s well-developed spirituality and her desire to share faith with others raised the level of any conversation.  She led a St. Aloysius prayer group for eighteen years until poor health among the members caused the group to dissolve.  She was open-hearted, giving and receiving in relationships, always happy to interact with her visitors and care-givers.

Anne, the last of her generation, died June 27, 2016.  She is loved and remembered by her religious community and numerous nieces, nephews and cousins.  All are happy to offer many thanks to the caregivers at Brookdale South Regal and Hospice of Spokane for their kind, consistent gentle, respectful care for Anne.