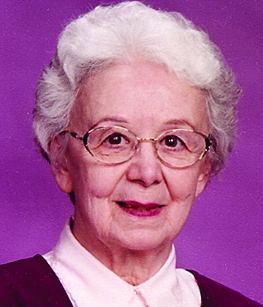 Sister Mary Oliviann Santilli, age 89, died on December 21, 2010. She was a vowed member of the Sisters of the Holy Names for 64 years.

The only daughter of Mario and Anna Scarelli Santilli, Olive was born in Portland June 25, 1921, and later joined by her brother Armand. She attended public schools, and graduated from Commerce High School in 1939, but she never forgot the Sisters who taught her catechism in released-time programs during those years.

ln 1944 when the United States was in the midst of World War II, she became aware of the world’s need for prayer. Convinced of this, she entered the novitiate of the Holy Names Sisters in January 1944.

However, it was as a secretary that she spent the majority of her days. As secretary for the provincial administration, confidentiality became a necessary way of life for her, and contributed to her quiet air of professionalism. No one really knows how many people she helped with their typing and composition problems. She did so cheerfully, and perfectly.

She volunteered in several capacities: taking care of the sick and aged; teaching English as a second language; helping with the sewing needs of her Sisters. A life-long dream to visit the land of her parents came true when she visited Italy and Switzerland, visiting relatives and places she had heard of all her life, keeping careful notes on every step of the way.

A beautiful woman, she surrounded herself with beauty and helped others create equally beautiful spaces. The need for prayer that she had felt in 1944 stayed with her as she kept her family, community and friends close during her final days of suffering.

Sister Oliviann is survived by her brother Armand and his wife Shari, nieces and nephews and the members of her religious community.