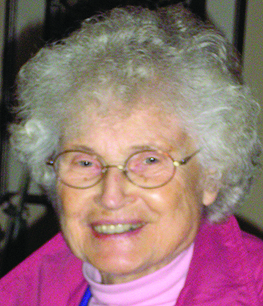 Sister Agatha Aicher (Florence), age 84, and a vowed Sister of the Holy Names for 59 years, died on September 9, 2010. Florence was born in Woodburn, Oregon, and attended Mount Angel Academy. She served as student body president in her senior year, and earned a scholarship to Marylhurst College. After receiving a degree in Sociology, she worked for Oregon Public Welfare Commission for two years, before entering the Holy Names Novitiate in the summer of 1949, taking the name Sister Mary Agatha. A long career in high school teaching took her to Holy Names Academy in Spokane; St. Francis, Eugene; St. Mary’s Academy, Portland; St. Mary’s, Medford; Sacred Heart Academy, Salem; and Star of the Sea, Astoria, where she served as principal and superior. Along the way she earned an M.A. in History from the University of San Francisco. Later, she joined the faculty at Marylhurst College, teaching counseling and assisting in the Life Planning Center. After leaving academia she turned to a new career particularly suited to her personality, hospital chaplaincy. For more than 20 years she was part of a team at St. Joseph’s Hospital in Bellingham, Washington, listening, talking, praying and helping people in especially trying times. A gentle, soft-spoken person, she loved and was loved by both patients and their families. And she was fun—she loved a good bargain, a good movie, and a vacation at the beach with her Sister friends. Sister Agatha is survived by her brother, the Rev. Boniface Aicher, OSB, her sisters, Gertrude Humpert and Catherine Nathman, her nieces and nephews and the members of her religious community.